Irwindale, CA – Irwindale Speedway & Event Center, the premier motorsports facility of its kind in Southern California, is pleased to announce its 2020 event schedule.

NASCAR will return on the 2nd Saturday of each month from March through Oct with the Whelen All American Race Series schedule. The fan favorite “Night of Destruction” presented by LKQ Pick Your Part, will return with seven events spanning January to December. New to the Speedway in 2020 will be “Outlaw Stock Car Racing” which will see some new, open-style, I.S. sanctioned divisions take to the track featuring Super Late Models, Pro Late Models and Modifieds.

Regional Series and Special Events will play an even bigger role for the speedway in 2020. I.S. will see the SRL Spears Southwest Tour and Spears Mfg. Modifieds come to town for multiple events. The premier race being the February 1st, season opening, Sunrise Ford All-Star Showdown presented by West Coast Stock Car Hall of Fame. The big money show will see Super Late Models tackle the 1/2 mile for a grueling 200 lap showdown that will pay $25,000 to the winner. The Pro Late Models will make their debut on the 1/3 mile with $10,000 to the winner of the 100 lap showdown. In March, the newly formed ARCA Menards West Series (Formerly the NASCAR K&N Pro Series West) will debut at Irwindale Speedway as part of the March 28thNight of Destruction. Summer Motorsports Mayhem will return again in June with Stunts and Pyrotechnics. Formula Drift: Title Fight will also return to “The House of Drift” in October for what is sure to be another ground breaking event. 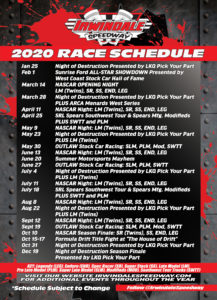 On the dragstrip side, Thursday Night Thunder will continue each week, except Holidays. Additionally, the first Saturday of the month will be reserved for drag racing (Except February). Saturday Drags seeks to provide a location for car enthusiasts to meet up and talk shop, race their cars, do burnouts in the Burnout Box or just watch the action.

The 2020 event schedule includes some exciting special events, the first of which will kick off the year in glorious fashion. “JJ’s Arm Drop Drags” will feature JJ Da Boss and the Memphis “Street Outlaws” from Discovery Channel, taking on Southern California’s best racers in a regional showdown. Along with fan favorites such as Nitro Revival, Hot VW, Truck Mayhem and Match Race Madness, 2020 is shaping up to be a year to remember for Irwindale Dragstrip. 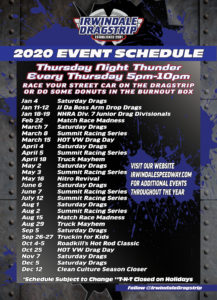 Stay tuned for more announcements regarding special events and additions.

About Speedway: Irwindale Speedway is located in the heart of Southern California, just outside of Los Angeles. Featuring both a 1/2 and 1/3 mile oval, along with an 1/8 mile dragstrip. Irwindale plays host to a variety of motorsports themed events including NASCAR Whelen All-American Series and NHRA Summit E.T. Series action. Thanks to all the great partners of the speedway: Sunrise Ford, High Point Distributing, LKQ Pick Your Part, Lucas Oil, Powertrip Rentals, O’Reilly’s Auto Parts, Jan’s Towing, Ken Porter Auctions, Pinnacle Peak Steakhouse, Clean Out Plumbing and Wood’s Electric. For a complete schedule of events, visit www.irwindalespeedway.com